As elegant and simple as Voice Point 160 A appears on the outside, as complex is its inner life.

VOICE-POINT belongs to one of the very few manufacturers of loud speakers in recent times who manufacture the Loud Speakers along with all its components all by themselves. This includes the case made from aluminum in bell-fouding technique, as well as the integrated electronics and the broad band chassis, everything comes from the same manufacture. Only in this way, VOICE-POINT can meet its own high quality standards it has set itself and guarantee 'pure auditory pleasure' to the music-lover.

A single-point radiator, which functions as the ideal acoustic source in combination with a double output stage which is developed with special regard to the optimization of the chassis properties.

A second, identical membrane at the backside of the case works only in the range of the lowest frequencies. Through a simultaneous in-phase radiation an excellent symmetrical pressure build-up is provided, so that no diffraction effects and no pressure turbulences can develop in the propagation of the lower frequency sound portions. Because of this the stimulation of the modal scape in the room and the higher frequency portions profit considerably.

The rearward radiating chassis has the same quality as the frontal membrane. This is of special significance, as the chassis works with the same agility and attack in the slower bass processes as the frontal speaker whose performance reaches up into the high frequency range.

Up to now there has never been a faster bass membrane.

Amplifier
Integrated into the body, the amplifier with 2x190 Watt for the front and back speakers with automatic switchon, phase- and group delay correction allows the complex VoicePoint 160 A to become autonomous, even without elaborate external electronics.

In Detail - the amplifier of VP 160 A was developed especially for this loudspeaker. It is so strongly adapted to the needs of the VOICE-POINT membrane that it is impossible to use it for other purposes. It corrects the phase position and the frequency response only through the adjustment by the transfer function. The overall result is so impressive that even a square transmission of audio signals becomes possible. “A novelty in the history of the loudspeaker”. No loudspeaker does this as well as the VP 160 A! The output of the amplifier is 400 Watt Sinus. 200 Watt each for the frontal and rearward chassis. The output stages are likewise identical and differ only in the low-pass filter function of the rearward membrane. It has an automatic switchon and apart from an asymmetrical chinch input a symmetrical XLR-input provides for adequate input.

The circuit principle of the amplifier is minimalistic.
VOICE-POINT has managed to put the damping factor over 1000, which accounts for the extremely dry and precise bass radiation. The exorbitant good damping factor can only be realized through the spatial proximity to the speakers. Regardless of the type and quality, longer loudspeaker cables would render this impossible. Due to the quality of the amplifier VP 160 A is only available as an active speaker.

Like the membrane principle, the details to the circuit are patent. 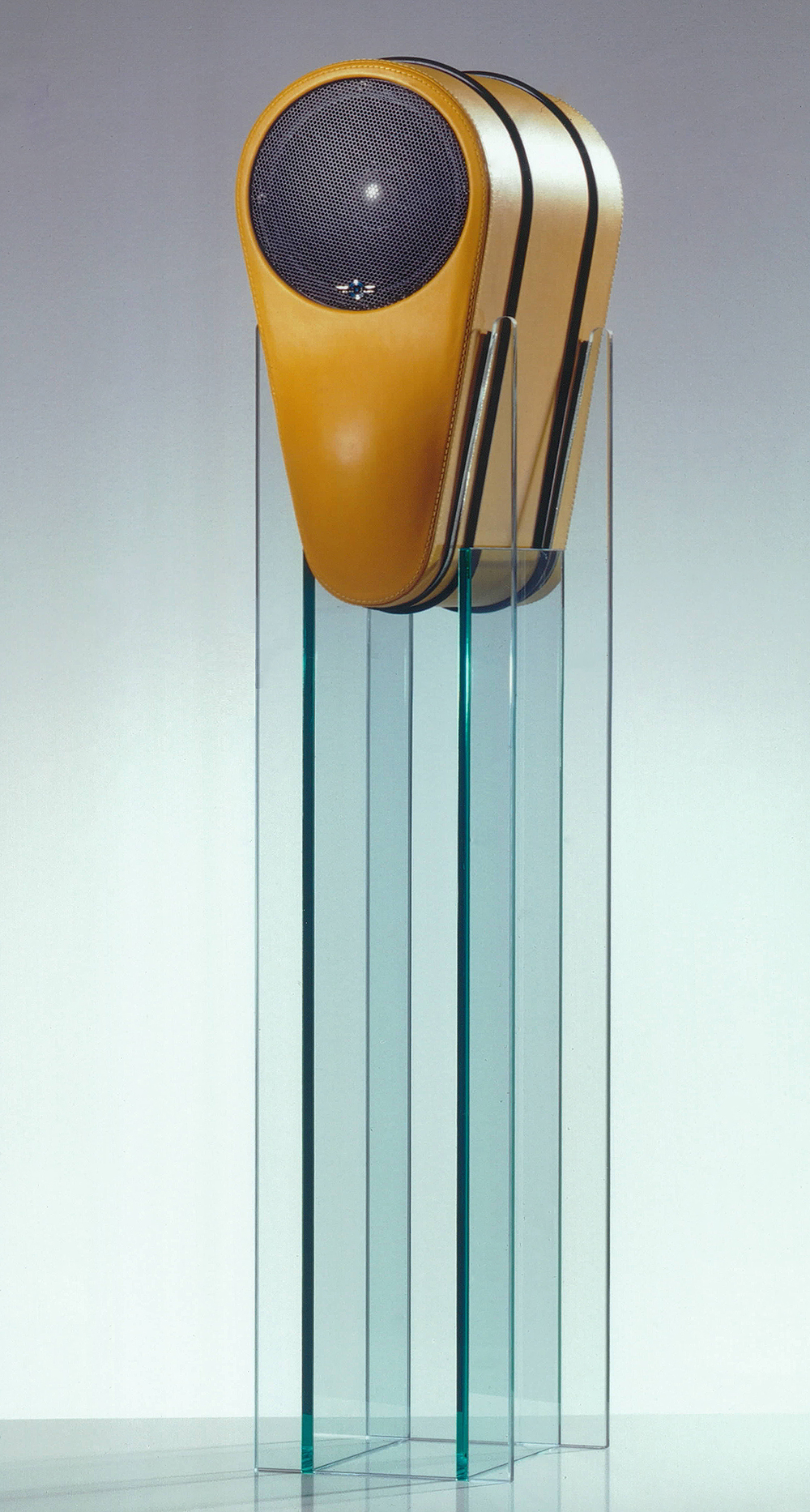 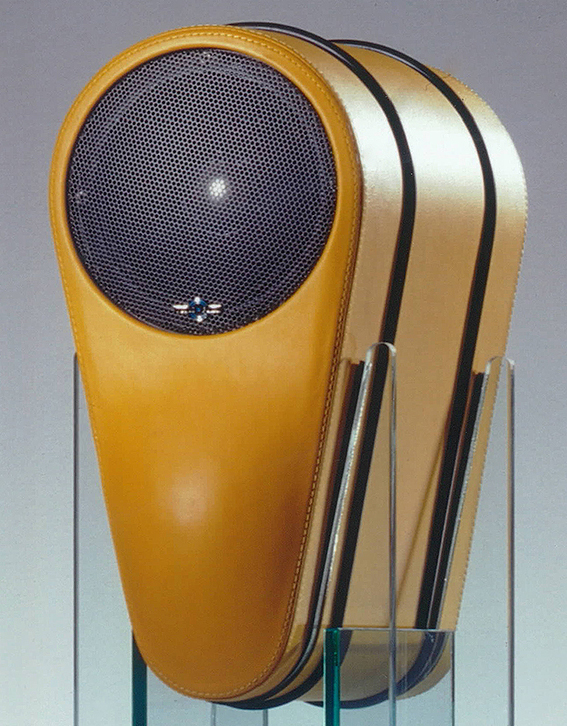 All pricing is quoted in Euros (EUR/) including German value-added tax (VAT), 19%

Prices and options for stands 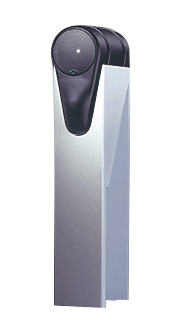 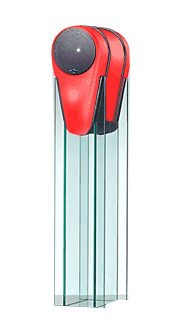 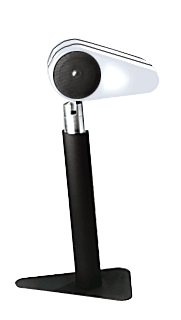 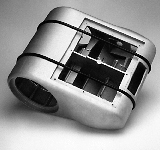 The robust 3-part case of VoicePoint 160 A consists of a low-vibrating aluminium-alloy and is handcrafted in the complex bell-founding technique. With the help of special optimization processes all parameters in the direction of vibration and resonance can be deactivated perceptibly and, of course, audibly.

On more than 2/3 of the loudspeaker range there is no acoustic baffle which interferes with the radiation of the acoustic original or causes reflections.

The still remaining minimum surface is formed in such a way that reflections, which might possibly still be dreaded, are diffused and are not reflected disturbingly in their angle of radiation.

Just test with a friend how corrupting acoustic baffle reflections are. Take a carton or a board with a 6 cm hole in it and ask your vis-à-vis once to speak to you through this hole and then to say the same thing again without this board. You will immedaiately notice the acoustic difference, it is incredible how great the deviation from the original is.

A quicker test is to put both hands or two CD cases to he left and right of the mouth opening.

Resonances
Cases should be acoustically dead, accepting no kind of mechanic stimulation. VOICE-POINT kills no energy in the case, but has constructed one of the most stable loudspeaker cases with VP 160 A. The acoustic energy shall remain where it is - in the membrane and its radiation. Inside the case of VoicePoint 160 A 38 complexly constructed struttings and stabilizers provide for a multiplication of stability and have an additional diffusing effect. To eliminate still remaining minimal vibrations VOICE-POINT uses the bell-theory. The focussing of remaining vibrations and their concentrated elimination. You remember: a bell with cracks does not sound and vibrate anymore, because all energy is now transformed into frictional heat in the crack and is thus acoustically eliminated. Similarly, the case of VoicePoint 160 A has exactly controlled 'cracks' which are filled with an extremely vibration-absorbing material and which transform remaining minimal vibrations into heat. These cracks are exactly calculated. The case consists of three parts and the connections of the individual parts represent the cracks in the bell.

Stationary waves ...
... do not exist inside the VP 160 A case.
The form alone ensures that there are no parallel walls. Diffusors inside the case additionally provide for a diffusion of remaining energies and cause their petering out. The inside is formed by 3 case-shells, which are fabricated with bell-founding technique and are joined by a specially developed adhesive, and which simulate the so-called cracks of a bell. Inside, 38 complex aluminium-struttings provide for a multiplication of stability. These struttings precisely direct the most minimal remaining vibrations into the 'cracks', where they are transformed into heat. As a result, all the music's sound-energy is preserved. Thus, regarding the pulse behaviour, a correct and stereoscopic optimal sound-representation, which is unequalled, is achieved by VoicePoint 160 A.

The diaphragm of the loudspeaker is realized after a world-wide protected patent. An uncoupling mechanism separates the bass diaphragm from the more highly frequent sound portions.The uncoupling mechanism is installed in such a way between voice coil neck and low clay/tone diaphragm that the low clay/tone diaphragm is not decoupled by the more highly frequent signal and does not radiate any more. The high clay/tone radiating range remains thereby in the ideal center of the construction and the entire transmission corresponds to the ideal single-point source.That means, a construction had to be developed, which rests directly against the moving coil neck, that does not absorb high frequency sound parts and still transfers deep frequency parts fast enought. That seemed a nearly impossible goal. But after years of research work, persistent attempts and audio studies it could be managed perfectly. The result convinces. One of the best broadband diaphragms was developed, which actually is also able to radiate the complete frequency band.The material of the diaphragm is a special paper mixture. Tests with exotic and high-technological diaphragm materials showed that these form usually an optimization on closer frequency bands - ideal for midrange and bass speakers ideally. For a broad-band radiating loudspeaker according to the piston principle these proved however as unsuitable.

Voice coil
The voice coil is an unsupported coil and is made from a high-strength and extremly light sandwich-voice- coil-supporter. The voice coil wire is made from copper-clad aluminium and is wrapped rectangular in one layer in a width/height proportion of 4:1. The extreme fill factor which is reached thereby is also decisive for the exceptional pulse processing of the chassis. In addition, the voice coil thereby gets its extremely light weight and has an even slighter resistance on its surface. Likewise, the skin effect, which is only theoretical in loudspeaker frequency ranges, thus does not appear anymore. The adhesive of the voice coil is a high-temperature resistant High-Tech construction. The technical problems, which prevent other producers from using such voice coils, have been solved by VOICE-POINT. So here, too, decisive advantages are given, which render such a fantastic chassis possible.

Magnet
With more than three kilograms the magnet is extremly dimensioned and has the most narrow air gap known to us which has ever been used in broad band speakers in the whole history of loudspeakers.The air gap is so narrow that the insulating lacquering of the voice coil has to be polished, in order to level possible unevenness. It measures only the 50-thousandth part of a milimeter. Thus an optimal utilization of the magnetic gap energy is guaranteed. The measurements and the size of the magnet are chosen not only for its strenth. As there is no need for a reduction of weight in studio- or home-speakers, VOICE-POINT took advantage of the greater mass and surface for an optimal cooling of the voice coil and magnetic gap.

The individual elements of the case are cast on Europe's most modern casting implements. The aluminium is approx. 700° C hot. This lost form for a part of the case weighs about 1500 kg.

Now and then small parts are made by hand - as in the good old days ...

There they lie now, the lighting of the hall is switched off, it's leisure-time. Tomorrow comes the final assembly of the case.

Air holes that have possibly been shut in during the casting are eliminated. 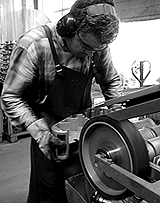 The casting edge of a middle part is grinded and machine finished. This is a particularly critical process, as a high dimensional accuracy has to be achieved with rough machines. A great deal of experience and fine feeling is required here.

Before the installation the completely cast piece is levelled and checked for rough dimensional accuracy. The fine adjustment is made during the final assembly.

For the purpose of quality control a complete parameter set is established for each individual chassis. Thereby VOICE-POINT uses critical measurement equipment and the most modern methods, which by far surpass the ISO standards. Before a VP 160 A is delivered, a test run of several days is performed, which serves the purpose of balancing out, and extensive listening tests are made.

Even in the installation handicraft is a must.

VP 160 A shortly before the power amplifier installation.